Education is the most powerful weapon which you can use to change the world, – a famous quote by Nelson Mandela, exemplifies the exact problem with homeschooling. 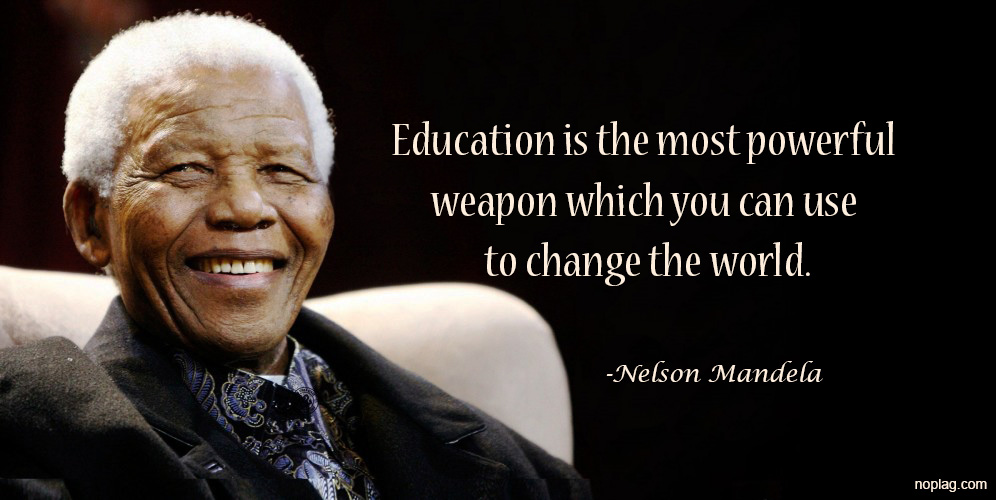 Though there are some homeschool parents who are fully dedicated to their children, and these said children are usually fine in the real world, but there are many other parents that have no qualifications and none of the perseverance that it takes to homeschool a child through all twelve years of school. If one were to think of homeschooling as a spectrum you would see that there are extremes at both ends, the far left being the unschoolers, the far right being the “Joshua Generation” or the extremely religious homeschoolers.

The central thought process in “unschooling” is that children have a natural desire to learn, and because of this they will learn in their own time and on their own schedule. There are no schedules, rules, homework, textbooks, or tests to speak of. The children are allowed to explore the world on their own and learn about what they want to and when. The issue with unschooling is that people think that their child “…will come around to reading, writing… on his/her own accord”. With this form of thinking the child will likely not be up to the standards that are required of that age. Though this may not be an issue in the younger grades, as they get older they will either have a lot of work to do or have none of the qualifications to get into the college that they want to go to. This causes a large issue with employment, for example, the child may want to go on to be a doctor they would not be able to make it into a good college without doing quite a bit of makeup work. Plus in a new study by Homeschool Success, it was shown that less than 15% of homeschoolers are admitted to ranking colleges. This may cause quite a few of the unschooled children to just “settle” for a job that does not let them live up to their true potential.

The “Joshua Generation” is the nickname given to the children that were forced into homeschooling by their parents, usually for religious reasons. The main issue with this is how often the daughters are treated unjustly, in many cases the daughters are said to have “the brain of a 12-year-old” no matter what age they are. Sometimes daughters are not even allowed to leave the house. The main offenders of this extreme end of the spectrum are those that still practice the old views of religion, that women are to be controlled by men, and that they are only useful for taking care of the house, and children, and bidding their husband or father. The daughters are usually mistreated and not taught exactly what they are supposed to be learning. The parents, usually the father, are also known for very brutal punishments for the smallest of “crimes.” Some children report being spanked with a belt for things such as “dawdling while trying on clothes”. They are quite often threatened with awful things such as when a child named Jennifer was caught posting about animal rights on Facebook  her parents “ took away Jennifer’s graduation presents and computer” and then proceeded to say that “if she didn’t eat meat for dinner she’d wake up to find one of the pets she babied gone”. Jennifer’s older sister describes her childhood as being “raised by someone with a mental disorder and told you have to obey her or God’s going to send you to hell”. Many other punishments are much worse, one father tied his daughter to her bed one night for not coming in by curfew, and then proceed to leave her there as the house burned down. This is why many of the children have started blogs, and help pages about their experiences now that they are out of the families, as well as completely cutting all ties to the family.

Though many people love the thought of homeschooling their children or being homeschooled, many regret it afterward. Even a women that were homeschooled for most of her education states, “I will not be homeschooling my daughter.” She says she has made this decision because “according to the National Home Education Research Institute, in 2009, there were 2.5 million homeschooled children in the United States. And while parents may homeschool for a variety of different reasons, 72% of those who responded cited religious and moral reasons. This was my family. Our parents homeschooled us with the desire to remove us from the influences of “the world,” which meant anyone who was not Evangelical.” She goes on to say that she doesn’t want that for her daughter.

While homeschool parents usually homeschool their children to “become closer” to their children, they are just sentencing themselves to years of discomfort. Spending too much time with anyone can cause every little thing they do to cause you to want to pop their head off, no matter how much you love them, this is especially true when the person in question is a rowdy seven-year-old. When you are able to send your children off to school and escape to work, you are then able to appreciate your time with them a bit more. There may be reasons to homeschool your child, but there seem to be many more reasons to allow them to go to a more public school.

Homeschooling: Yes or No?

The Internet: Are Children Smarter or More Social Because of It?
5 Bad Excuses for Plagiarism
Thank you for subscribing!

One thought on “Homeschooling: Yes or No?”